Surviving the Dry Season Of The Betting World

As the World Cup draws to a close in a climax of football frenzy, many fans will be left facing a dry season, with no new football to bet on for weeks. Still, at least after all the excitement of Russia 2018, the dry season has been significantly shorter than usual this year. But when does all the action start up again and what are the big games to anticipate?

For most of the big names in soccer, it’s time to head off for a well-earned break with their families. They’ll be spending the next few weeks dodging the cameras as the paparazzi try to grab a new snap of their stunning WAGs on the beach. And no doubt, it will be Neymar attracting attention from the snappers every time he trips over his feet (again). But with the new season just around the corner, there isn’t that long to rest up.

For some teams, the Champions League has already started.

Of course, for some teams, the new season has already started, with the Champions League Qualifying preliminary rounds already underway, and the First Round starting on July 24th. Of course, most of the big-name teams, including Manchester City, Manchester United, the Spurs and Liverpool, won’t appear in the competition until much later, but Celtic has had to start from the bottom against Alashkert, and even the likes of Ajax and FC Basel, only join the competition one round later. Of course, with the big-money ties of the Group Stage as the prize, these games are far from insignificant and offer some great opportunities for odds-on punters or the occasional long odds, giant-killing win.

For most football fans, the official start of the season is the FA Community Shield or Charity Shield as it used to be known. Contested by the winners of the Premier League and the FA Cup, this season’s showpiece features Manchester City and Chelsea. The game will be coming home long before you’ve got “Three Lions” out of your head, kicking off at Wembley on Sunday, August 5th. But don’t worry, you’ll still have a few days to get your outright season-long football bets on and predict the winners and relegation candidates for each league before the first games kick off. 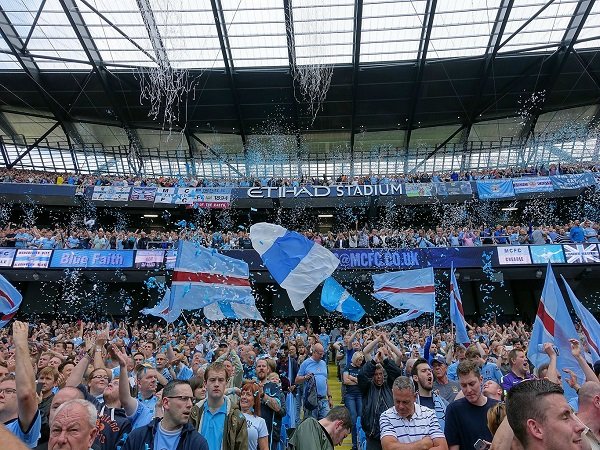 Will City fans be celebrating again this season?

But you’ll have to be quick because the Premier League season starts just five days later, with 17/18 runners-up, Manchester United, against Leicester at Old Trafford on Friday, August 10th. Such is followed by a tasty first-weekend tie that pitches reigning champions, Manchester City, against last year’s sixth-place team, Arsenal, at the Emirates. It’s quite a debut for new manager Unai Emery, the first new face in charge at Arsenal for over 20 years, following the departure of Arsene Wenger.

The first weekend also sees Chelsea at Huddersfield, Liverpool, welcoming West Ham to Anfield and Tottenham’s team of World Cup stars on show against Newcastle at St. James’s Park. The following weekend also has some mighty clashes, with Chelsea against Arsenal on Saturday, and Manchester United against the Spurs as your Bank Holiday entertainment.

If football to you means throwing a pigskin rather than kicking a ball, then you have to wait a little longer. The NFL preseason games may already be underway, but the kick-off game for the regular season doesn’t take place until Thursday, September 6th when current Super Bowl LII Champions, the Philadelphia Eagles, take on the Atlanta Falcons at Lincoln Field. As ever, there will be plenty of moneymaking NFL betting opportunities, especially during the uncertainty of the first few weeks.

Round or flat (or even flatter if you are Tom Brady), there’s plenty of football action to come. But if you can’t wait to have a flutter, there’s always loads of online casinos to choose from to keep you going in the dry season, with plenty of reviews to help you choose where best to place your bets.

With 380 matches to come in the Premier League alone, and over 500 each in the three other main divisions, there’s plenty for which to play and to bet on. Plus, there’s over a 100 more matches in the Champions League and no less than 256 games in the regular NFL season, all played by the turn of the year. So, dig out your scarf, wash your lucky shirt and get yourself set for the excitement of a whole new season.

How to select a safe new casino app

Nowadays it can feel as if fresh casino sites are launching each and every day,…

5 Good Reasons To Choose A No Wager Casino Bonus

Bingo has enjoyed an incredible renaissance in the online setting and, in 2020, it is…

Retro themes have permeated mainstream media over the last few years, and iconic imagery from…

Since the COVID-19 crisis began to spiral out of control back in March, there has…